“My math fellow is awesome and has us do our best to
be persistent all the time because she cares about how we do in class.”– 6th Grade Student 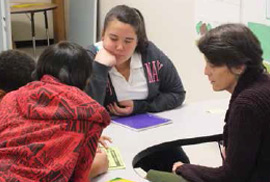 Our mission is to close the opportunity gap by providing small group math instruction for our highest need students in order to accelerate their academic growth in preparation for college and career.

Denver Fellows and Relay Graduate School of Education partner to offer a select group of Fellow Residents teacher preparation, licensure and a Masters of Education.