Close the opportunity gap by providing small group math & literacy instruction for our highest need students in order to accelerate their academic growth.

By, Maureen Malcolm, 2014 Fellow Alum and Recruitment and Data Coordinator 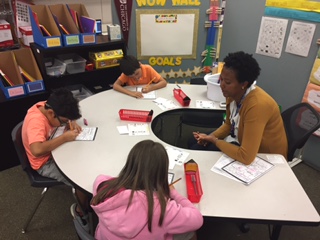 Here at Denver Fellows we work create learning environments that support the whole child through the development of growth mindsets with adults and students. Over 90% of our students are students of color so we make an effort to expose our students to role models of color in STEM and literacy fields on a monthly basis.  We do this because there are incredible stories to share that are too often overlooked and because we know the impact that negative stereotypes have on our kids, adults and our mindsets.  To learn more about stereotype threat and our influencer of the month intervention, read on.

In 1995, Claude Steel and Joshua Aronson wrote an article entitled “Stereotype Threat and the Intellectual Test Performance of African Americans”. In this study, they introduced the idea of stereotype threat which is now a widely researched concept.  As described in a New York Times article by Annie Paul (2012), stereotype threat describes a phenomenon in which individuals who are part of negatively stereotyped group underperform on tests when primed to represent their group or when the negative stereotype is activated. For example, stereotype threat has been shown to have a negative effect on standardized test scores for women and African American students when they are reminded of their race and/or gender right before taking the test and told that the test is a measure of innate ability.  Research has also been able to show that the negative impact of stereotype threat can be counteracted.  As described in an article written by Steele in 1997, some of the techniques that may alleviate stereotype threat include:

Influencer of the Month

Our students are supported by Fellows who hold them to high expectations, believe in their abilities to succeed academically, and model a growth mindset. Each month, students are provided with the opportunity to learn about diverse professionals who have succeeded in both STEM and literary careers. Two individuals from stereotype-threatened groups are showcased in our Math and Literacy Labs and our students are taught about their backgrounds and accomplishments.  We call these individuals the influencers of the month.  For the month of November, the Denver Fellows program will highlight Gabriel García Márquez, the Columbian born author who was awarded the Nobel Prize for Literature in 1982 and Dr. Helen Rodríguez-Trías, a Latina doctor that devoted much of her career to the women’s health movement and was the first Latina to be voted in as president of the American Public Health Association.  We know that representation matters and work to ensure our students are provided with role models from stereotype-threatened groups all year long.

If you are interested in being part of our work, or know someone who is, please complete our interest form or referral form today!